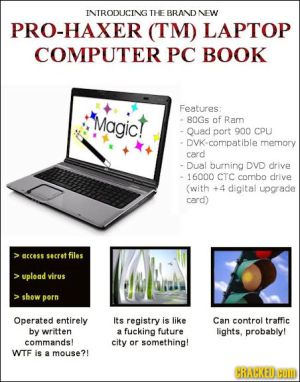 "Hollywood thinks that computers run on black magic and hackers are wizards."
"Quite exciting, this computer magic."
— Viv, This is Spın̈al Tap
Advertisement:

Computers on TV often bear only superficial resemblance to their real life counterparts. In fact, they are often just a 21st-century substitute for magic. A Computer Wizard is a literal wizard. Evoking arcane words with their keyboard, they cast spells into the infinite (and physically real) realms of Cyberspace.

For computers which are literally magical see Magitek. See also Clarke's Third Law. If a computer is shoddy, and not magical in any way (except maybe magically terrible), it's The Alleged Computer.