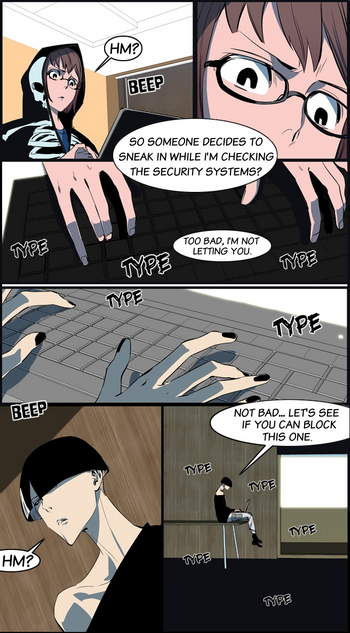 A head-to-head confrontation between two computer hackers, combining the excitement of people typing with the thrill of network protocol loopholes being exploited.
Advertisement:

One hacker is trying to penetrate a computer system while the second is busily trying to keep the first one out. Expect the hackers to consider each other to be a Worthy Opponent. Often mixed with an attempt to back-trace the invading Hacker's source, depicted much like phone back-tracing usually is. Expect plenty of Hollywood Hacking jargon and visuals to keep the audience occupied.

Almost no one thinks to simply unplug the target computer from the network because apparently Everything Is Online, always.

Also worth noting is that in reality, if hackers have identified each other, whoever has root access (or is closer than the other one) can simply deny the other one access to absolutely everything. By default, this means that if either hacker is the home security, they automatically win the moment they know the hacker exists. This is why in reality, hacking is all about stealth (hence the common phrases like "trojan horse" and "worm")

Can overlap with Rival Science Teams, if the Dueling Hackers are working for scientists, or are scientists themselves.