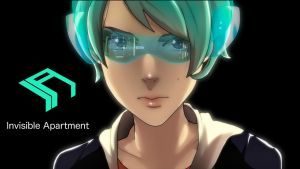 Invisible Apartment is a set of Visual Novels by Vysoko Anime Production. The games are:
Advertisement:

Invisible Apartment's setting is basically Cyberpunk or Post-Cyberpunk. The story starts when Kacey, a hacker, tries to track down another hacker who nearly got her arrested, and gets caught up in a struggle between the government and those resisting it.