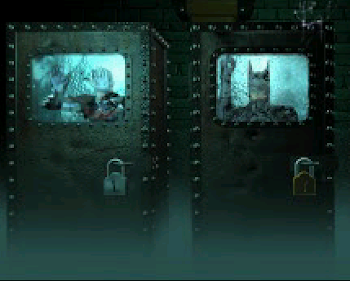 "This is not the production of Batman On Ice I was expecting!"
"In cryo, you don't dream at all."
— Jake Sully, Avatar
Advertisement:

Some science-fiction works don't risk putting their dangerous criminals in a Cardboard Prison, instead they freeze the criminals. It makes sense, they can't escape without outside help while in cold sleep (and you don't need to feed them), but you have to wonder if it's punishment enough. Sometimes the pacifistic future society needs someone to teach them how to fight again, or after civilization collapses some foolish adventurers will unlock a cryotube and accidentally unleash a monster.

There is some Fridge Logic involved in the premise. It's not really a punishment, discounting future shock after long periods of incarceration. Most of the time there's no opportunity for rehabilitation. Also, there is no aging while in suspension so the prisoner is not losing a significant part of his life while doing time. Really all it can do is remove a dangerous felon from society, like life imprisonment or execution. And unlike execution, cryonics could potentially be reversed if the inmate turns out to have been framed or otherwise innocent, or someone has need of their particular skills. Unless they're conscious and have to experience a lifetime of hypothermia without dying of cold, unable to move or scream…

A common cause of Cold Sleep, Cold Future, frequently results in a Fish out of Temporal Water; it may also be a case of Sealed Evil in a Can. Compare Monster in the Ice, which can often overlap with this, especially when the best way to deal with the creature is to freeze it away again. Compare also Crystal Prison, which has similar visuals and themes. See also Mind Prison, with which there's sometimes overlap.