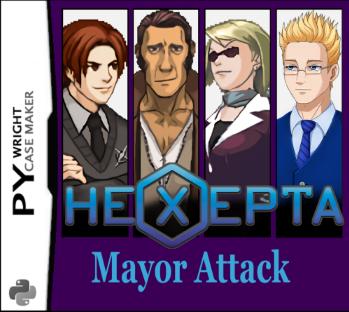 The cover art.
Hexepta: Mayor Attack is a game based on the Ace Attorney series. It was inspired by a fan project named "Hexepta: Logic Hack," despite it's cancellation. The game, however, makes use of the trickle of information that was released about Logic Hack, as well as the author's blind predictions, to serve as an "unofficial sequel."

The game is set in the humble town of Hexepta, in the year 2024. Four years ago, a law student named Argus Hakan fought in a court system run by his school. Having taken down the headmistress and bringing an end to this corrupt system, Argus begins to truly study to become a defense attorney. However, when he accompanies his mentor to watch one of her trials, he ends up becoming the lead defense attorney of the case. From there, his life briefly spirals out of control as he gets caught up in one case after another until, by the end of the week, he has gotten knee-deep in a grand criminal conspiracy - and his dear mayor is the target!