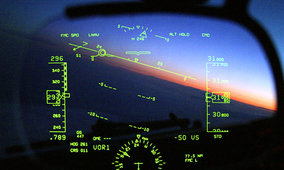 As used by an Ace Pilot.
Advertisement:

Originally a military technology, a Heads-Up Display is a device which projects supplemental information onto the surface reflection of a transparent panel. This allows the user to view the projection, or view objects beyond the panel without moving his head. The system is a compromise between limiting the user's field of view and forcing him to look away from his primary display to view additional information. Fighter jets use these systems to show targeting information. Systems using this technology are sometimes called "Augmented Reality", though that term has become increasingly associated with entertainment products in the 21st century.

In the real world, most uses of this technology remain military, though some car manufacturers use these displays to show dashboard indicators. They're also becoming increasingly common on airliners and other civilian aircraft as well.

Though very different technologically, the term is frequently used in the context of video games to describe a style of user interface where supplemental data is overlaid directly onto the main window rather than being separated into a different display panel. This allows the main window to occupy the entire viewport of the game. The name probably originated with the fact that the earliest uses of this design were in flight simulators, where an actual HUD was being emulated. A video game HUD may be diegetic, meaning that it is actually part of the in-game world and visible to the character (more common in sci-fi), or just for the player's benefit. A real-world HUD must under no circumstances interfere with the operator's view beyond the panel. In videogames this constraint is relaxed somewhat, since you can hardly display information outside of the monitor or TV screen (unless a second screen counts...).

If it's the first person view of a robot, or otherwise mechanical being, then you're looking at Robo Cam. When it's actually part of the in-game environment, it's a Diegetic Interface.

You will be shocked to learn that HUD has nothing to do with the Paul Newman movie of the same name, which is about a ranching family. The United States' Department of Housing and Urban Development