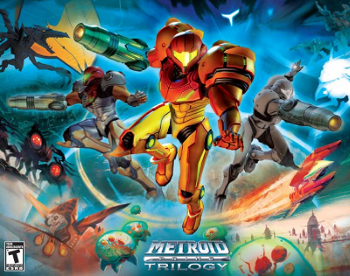 "The Hunter has made planet-fall."
"Evil must be destroyed. But first, it must be found."
— Tagline for Metroid Prime
Advertisement:

Please note that this page and links to it are meant to cover the sub-series as a whole. The link titled Metroid Prime is only for the first game.

An offshoot of the main Metroid series, Metroid Prime is the name given to installments of the franchise that mix its traditional Metroidvania gameplay with First-Person Shooter elements, with Nintendo billing the combination as "First-Person Adventure" due to combat being downplayed in favor of the franchise's usual puzzle-solving and exploration. The subseries consists of three (eventually four) main games and several sidestories that together serve as an expanded Interquel between the events of Metroid and Metroid II: Return of Samus.

The plot of the original trilogy involves a radioactive mutagen called Phazon that arrives on mysterious comets and wreaks havoc on planetary environments. Series protagonist Samus Aran spends these titles trying to stop the Phazon from turning various planets into dead husks, while at the same time, her Space Pirate enemies are trying to exploit the mutagen for their own evil plans, much like they did with the Metroids before.

Prime 1 has Samus disrupting Space Pirate activity on Tallon IV, where Samus' Chozo guardians had a second home and from which they have since vanished thanks to a Phazon comet crashing on the planet and corrupting it. Echoes sees a similar comet landing on a planet named Aether, which is split into two worlds as a result of the crash, with Samus helping what remains of the native inhabitants save their world while also dealing with a new nemesis known as Dark Samus, an alter ego who's fueled by Phazon, resulting in major clashes between her and the Space Pirates. Corruption concludes the arc by having the Space Pirates manipulated by Dark Samus into finding the original source of Phazon and assaulting the Galactic Federation with a multi-pronged attack; Samus must now venture to multiple planets and space vessels to eradicate Dark Samus and the threat of Phazon once and for all, while being under its influence herself. The trilogy saw critical acclaim, with the first Prime game remaining the most financially successful in the entire Metroid franchise.

These games received a Compilation Rerelease on the Wii entitled Metroid Prime Trilogy in 2009, featuring numerous updates including Corruption-style controls for the first two games, a widescreen aspect ratio, improved lighting and textures, and a token reward system. Many of the sequence breaks from the first two games were also removed for the collection. Metroid Prime Trilogy would later be re-released on the Wii U eShop in 2015.

The series also features two multiplayer entries: Hunters and Federation Force. Hunters takes place between Prime and Echoes and is disconnected from the Phazon storyline. Instead, the game details a telepathic message from another galaxy about "the secret to ultimate power," with Samus and six other Bounty Hunters answering it for all their own reasons. Federation Force takes place after the events of Corruption and deals with the aftermath of the Phazon crisis. No longer able to take advantage of the mutagen, the Space Pirates have taken to using technology on themselves and their attack animals to replicate its more beneficial effects as they operate in the Bermuda System, while the Federation counters by giving their soldiers giant mech suits in order to stop them. Both titles received mixed reception from longtime series fans; Hunters for being an obvious attempt to win over the Halo crowd and Federation Force for being the first game to remove Samus Aran from a playable role, having the player take control of one of four soldiers in a squadron instead.

Metroid Prime is often considered Nintendo's premiere Western series, both due to Metroid's overall popularity in the region and because every installment in the Prime sub-series has so far been handled by a Western developer. All the main, numbered entries in the series are developed by Texas, USA-based Retro Studios. Metroid Prime Pinball, a pinball adaptation of the first game, was developed by Oxfordshire, England-based Fuse Games. Hunters was developed by the Washington, USA-based Nintendo Software Technology, an in-house development team at Nintendo of America. And finally, Federation Force was developed by British Columbia, Canada-based Next Level Games.

In 2017, Metroid Prime 4 was announced as entering development for the Nintendo Switch, ten years after the release of the last numbered entry. The title was originally being produced by an unknown, new development teamnote (with many sources

in early 2019 that they'd be restarting the project from scratch and returning the reins to Retro Studios.

This videogame sub-series provides examples of: