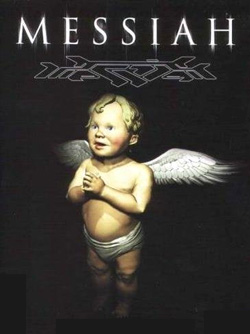 When I sleep I dream the same dream. I dream I'm dying. Every night I watch myself die as if I'm the killer, and as I kill myself I experience happiness and joy, but as I die I scream in horror and fear. Every night I dream the same thing, and as the nights go on I get scared. I really shouldn't have any fear of dying for I dwell within the nirvana of heaven and I've walked in the valley of death. But maybe this isn't a dream.
—Bob (from the manual)
Advertisement:

Messiah is a 2000 science-fiction game by Shiny Entertainment, featuring the angel Bob, sent by God to Earth on a mission. As it turns out, the future Earth is not a nice place. It is corrupt, brutal, and ruled by dictators, called "Fathers". They recently discovered that Heaven, Hell, God, and Satan are real—and their first thought was that of conquest. They contacted Satan and put him under their control, in preparation to take over Heaven. God, who will be having none of this, sends an agent to Earth to investigate the situation—namely, Bob.

Bob is just a chubby cherub without any real angelic might, but he's got a trick up his sleeve: the ability to possess people. Possessing the right persons at the right time is one of the main mechanics in the game, and more or less its main selling point.

Overall, Messiah is best described as an Action-Adventure game with some Third-Person Shooter, Platform Game and Stealth-Based Game elements. It can be purchased from GOG.com.

You might also want to know this is where the Roblox "OOF" sound comes from, no joke.