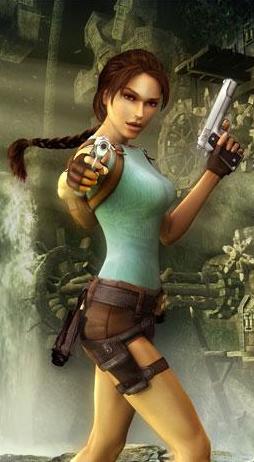 A standard player character for a Third-Person Shooter or modern 3D platformer. An implausibly curvy, twenty-something woman in a Stripperiffic outfit, who obeys the commands of the fellow behind the controller.

A quick look at the demographics of the game industry sheds some light on this. Since Most Gamers Are Male, Toby Gard (the creator of Lara Croft) decided that if the game was going to show the back end of a character for hour upon hour, then it may as well be the back end of a pretty girl. Some straight women also enjoy these characters as they have an attractive avatar to identify with, while kicking ass.

Games with main characters of this type will often incorporate jumping and flipping acrobatics, Le Parkour, and possibly Jiggle Physics. This can be somewhat pointless, as the parts that jiggle are usually not visible in the default camera view.

Note that not every female main character in a third-person game meets the criteria. Blatant exploitation in clothing, animation, and marketing is key.

As the page quote shows, it's a common excuse for males playing online with a female avatar.

Note also that a Third Person Seductress does not guarantee the success of a game; many of the examples below sold poorly and are the butt of much snark concerning their protagonists when it's perceived that the developers were banking primarily on sex appeal to sell their product. Characters of this nature in multiplayer games can also become unpopular due to perceptions that unskilled players pick them for fanservice, rather than because they can play them effectively. On the other hand, there are entire modding communities dedicated to making characters like these even more fanservice-y with custom skins, so it's unlikely to die out anytime soon.