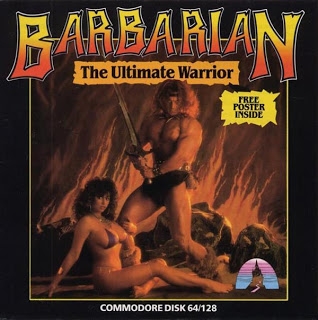 Barbarian: The Ultimate Warrior (titled Death Sword in North America) is a 1987 Fighting Game developed by Palace Software and published by Epyx that was released on several platforms such as the Amiga, the Atari ST, the Apple ][, and the Commodore 64. In the game's single-player story mode, the player takes control of a nameless barbarian on a quest to rescue the beautiful princess Mariana from the evil wizard Drax. The player must face Drax's eight barbarian bodyguards before facing the wizard himself. The game also featured a two-player versus mode several years before Street Fighter and Mortal Kombat would popularize competitive fighting games.

You can play an updated rerelease here.

In 1988 a sequel, Barbarian II: The Dungeon of Drax, was released. Unlike its predecessor, this game was a side-scrolling action game rather than a fighting game. Players can choose to play as the barbarian from the first game or Princess Mariana, who has made the switch from Damsel in Distress to Action Girl. The story involves pursuing Drax to his lair and finishing him off once and for all.

No relation to a similarly named game by Titus Software.

Age Of Barbarian is a Spiritual Successor to the sequel.