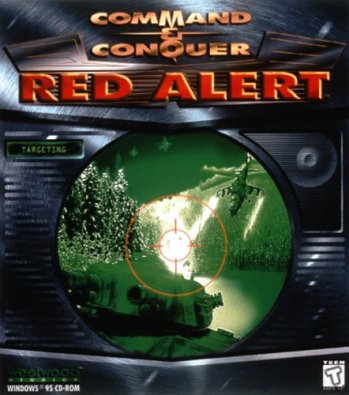 Assistant: D-did you find him?
Einstein: Hitler is... out of the way.
Assistant: Congratulations, professor! With Hitler removed—
(Einstein holds up his hand to stop the assistant from speaking, then starts winding his stopped watch)
Einstein: Time will tell. Sooner or later... time will tell...
— Red Alert's intro

A Spin-Off prequel to the original Command & Conquer, using the same engine and gameplay to tell a story of an Alternate History WWII fought between the European Allies and Tesla-powered communists bent on world domination.

Red Alert, the first game of the series, provides a contrast with its successors thanks to a serious and mostly camp-free tone. Released by Westwood Studios in 1996 for DOS and Windows (in 640x480 VGA resolution, a major improvement from its predecessor) platforms. It later spawned its own sequels, each taking place in an alternate alternate timeline; for a while, an explanation some fans came up with was that the Allied ending of Red Alert led to Red Alert 2, and the Soviet ending of Red Alert led to Tiberian Dawn. Word of God, however, says that the Allied ending is canon in both timelines, meaning that something must have happened after Red Alert's conclusion to cause the timeline split.

The premise is simple: in 1946, operating out of a laboratory in Trinity, New Mexico, Albert Einstein uses a time machine to travel to Landsberg, Germany in 1924 and removes Adolf Hitler from history. While this prevents the Nazis from rising to power and keeps Germany relatively docile, unfortunately it leaves Josef Stalin with no obstacle to the Soviet Union's expansion. This sparks an even worse version of World War II during the early 1950s as the Allies try to withstand the endless hordes of the Red Army, backed by deadly Tesla-based technology.

In late 2018, Electronic Arts, current owner of the C&C franchise, announced they were working with Petrogylph Games, a studio formed by Westwood Studios veterans, to remaster Red Alert, alongside a remaster of Tiberian Dawn. Both games were released as the Command & Conquer Remastered Collection on June 5, 2020, nearly 25 years after the release of Tiberian Dawn.

EA declared the game freeware in 2008, and can be downloaded freely from CNCNet

, an open-source Fan Remake of this game, Tiberian Dawn, and Dune 2000 that rebalances and modernises the game, adding in features from later Command & Conquer games.

Shortly before the release of the Remastered Collection, EA released the source code for this game and Tiberian Dawn under GPL 3.0.

Please note that this page is for tropes specific to this game, the first Red Alert and its expansions. Please add tropes relating to multiple games to the Red Alert series page.

Black-out the base and nothing will stop you.

The intro for the real-time strategy game Command and Conquer: Red Alert shows Albert Einstein traveling back to 1924 Germany to erase Adolf Hitler from existence. Despite his success, World War II still happens only with Josef Stalin's Soviet Union being the major power bent on conquering Europe.

The intro for the real-time strategy game Command and Conquer: Red Alert shows Albert Einstein traveling back to 1924 Germany to erase Adolf Hitler from existence. Despite his success, World War II still happens only with Josef Stalin's Soviet Union being the major power bent on conquering Europe.