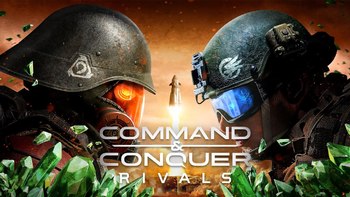 The first new game in the Command & Conquer: Tiberian Series since Command And Conquer Tiberium Alliances, Command And Conquer: Rivals is a Mobile Phone Game based around short, three-to-eight minute mini-RTS matches between two players, playing with "deck" of six units drawn from a "best hits" album of classic Command & Conquer units collected from every game in the franchise such as the Mammoth Tank and Titan Walker, commanded by one of a number of Commanders with their own unique special abilities, ranging from General Solomon ordering the Ion Cannon to open fire on a target to Seth sending a drill pod full of flamethrower-wielding shock troops to nearly anywhere on the field.

Gameplay centers around control of a series of points, which are connected to a nuclear missile silo on the map, which slowly charges up until it's ready to launch, then is fired at the opponent's base. Be careful however, as the missile silo shows no favorites, it'll fire for whoever points it at their opponent first regardless of who actually charged it up. Each base can withstand at most a single nuke before going down to the second, and cunning commanders can order their troops to go straight for attacking their opponent's base to destroy it directly instead.