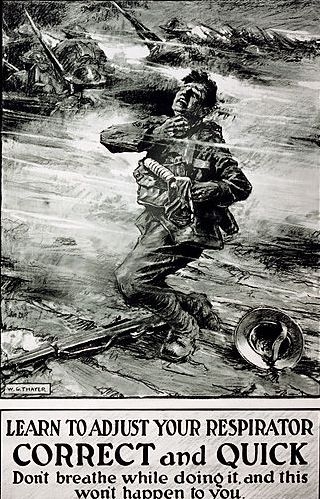 As under a green sea, I saw him drowning.
"The sickly sweet aroma spreads.
Its stagnant arms bring only harm,
Along with sluggish, looming dread."
— Agent 8, Splatoon 2: Octo Expansion

Lethal gas is found in many forms and in many environments. It is naturally found in many underground settings (in Real Life as well as in games, particularly near volcanoes) and is abundant in the atmosphere of many planets. Humans have used it as a weapon of war,

a method of execution, and in certain historical mass death traps.

This gas often has a greenish colour, which is more a case of Technicolor Science than of Truth in Television. While chlorine gas (used extensively in the First World War) is green, nerve gases have been the chemical weapon of choice since World War II (although chlorine still works quite well if your enemy isn't well supplied with protective equipment, and has been used as recently as the ongoing Syrian Civil War) — these are colourless and odourless, and can penetrate the body through exposed skin. A common mistake is to depict a gas mask as the full extent of the protective gear needed against nerve gas — in reality, you would also have to prevent any of the gas coming into contact with your skin. This was made clear in the TV series Breaking Bad where, when Walt and Jesse were manufacturing crystal meth, they donned not just respirators, but full coverage yellow hazmat suits because the fumes were not just toxic to inhale, they were toxic if they contacted the skin.

Another variation is a gas that is not inherently harmful, but fills the space instead of breathable air. In this case, the danger is simple suffocation, and a breathing mask with an oxygen supply is sufficient protection.

In video games, being surrounded by poisonous gas is likely to deplete your Oxygen Meter or Life Meter very rapidly.

This trope is always present in a Gas Chamber.

The Joker one-shots Needles Kane with his Joker Venom.

The Joker one-shots Needles Kane with his Joker Venom.