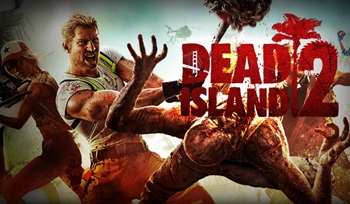 "I’m the bomb and I’m ’bout to blow up"
Advertisement:

Dead Island 2 is the long-delayed sequel to Dead Island. It was originally announced for release in 2015, developed by Yager (Spec Ops: The Line) and published by Deep Silver. However, Yager was moved off the project, with another developer, Sumo Digital, taking their place, only for Sumo Digital to get moved off as well and replaced with Dambuster Studios.

It's been months after the events of Banoi and now the U.S. military has gotten the state of California in a full quarantine due to a zombie outbreak. But are the citizens freaking out? Nope! Not by a long shot! Instead, California's become a super-bloody paradise for those who either don't want to leave the Golden State or want to do their part in the zombie epidemic and deal with them by force. Or do it just because it's fun.

Check out the E3 2014 trailer right over here