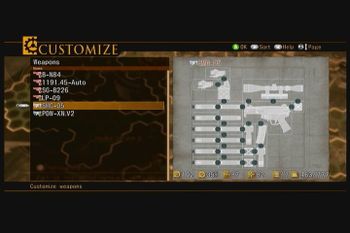 It's time to get tacticool.
"Are you tired of having to purchase a different weapon for every occasion? Then try GrummelNet’s new Constructo line, and take charge of your arsenal. Each weapon can be modified with any constructo-approved upgrade: Rate of fire, ammo type, specialty triggers. If you can dream it, Constructo can deliver it!"
—GrummelNet Weapons Vendor, Ratchet & Clank Future: A Crack In Time

In many video games, you often are tasked with completing given objectives with the tools, equipment, units, or vehicles that are given to you by the game's designers. Often this can be an inflexible situation.

Not so much with DIY, or Design-It-Yourself Equipment, as the game designers give you, the player, the power and ability to craft your own instruments of destruction, typically with some form of in-game editor. Generally, any game that allows (or in some cases, requires) you to create your own tools for your use in the game environment falls under this trope.

Used frequently in serious racing Sims, Real Time Strategy, First Person Shooters, and many other genres, and ranges from purely cosmetic design choices (such as different custom paint-jobs on a vehicle) to customization of existing items, to being a critical and integral part of gameplay with designing equipment from scratch. Depending on how well it is implemented into the game, It can be a unique and refreshing way of playing the game. Done poorly, and it may result in an utter Game-Breaker. Or a Scrappy Mechanic, if the usefulness of the custom equipment falls too far on the other end of the spectrum.

Not to be confused with An Interior Designer Is You. That deals with designing interiors or the insides of rooms. See also Item Crafting (which allows the player to make their own gear, but doesn't always let them customise it), Randomly Generated Loot (when the game decides on the player's equipment's stats at random), and Spell Crafting (a similar trope about magic instead of items).