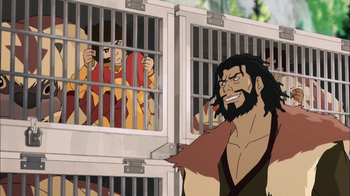 "Whoever hits the most manatees wins!"
— Hoggish Greedly, Captain Planet and the Planeteers
Advertisement:

Be aware! The wild is just filled with Evil Poachers willing to murder any human who gets in their way. Poaching means any illegal hunting, but in fiction it is usually associated with the hunting of endangered species, such as cute panda babies or meddling kids.

Many Evil Poachers have no motivation to hunt and threaten people other than to be evil, which puts them on the same level as the various Green Aesop villains who seemingly pollute out of malice rather than because they are manufacturing anything. If Evil Poachers do get a motive, it will probably be selling their prey on the Black Market.

Evil Poachers are Villains By Default in a Kids' Wilderness Epic, a genre in which they tend to end up as slapstick idiots dressed in scary animal skins.

In Real Life, most poachers are poor people trying to get out of poverty; they are unable to afford a license. This is also a major reason why poor poachers will often target endangered animals - the rarity of their parts increases the value. However, they do often shoot at park rangers if they encounter them (they're the reason why most rangers in Africa are heavily armed) and are often hired by people in organized crime (which means media that does acknowledge the average poacher's real circumstances is likely to reserve this trope for the mobsters who hire them). There are some illegal trophy hunters as well, ranging from amateurs hunting without a license and off-season to wanting the glory of getting a rare animal.

The inversion, Roguish Poacher, is most common in older works, particularly fairy tales and Folk Music. The Roguish Poacher always hunts for food (usually for his starving family) and lives in a Peter Rabbit-vs-Farmer MacGregor kind of relationship with the Evil Fatcat Landowner. If the two do come into conflict, expect Evil Versus Evil to come into play. Compare Karmic Thief.

Subtrope of Classical Hunter. A sister trope to the Egomaniac Hunter. Compare with Cruella to Animals. Contrast the Hunter Trapper, who hunts and traps legally and is much more likely to see reason; the Roguish Poacher, this guy's Justified Criminal counterpart; and the Great White Hunter, the heroic counterpart.

The Ferengi are hunting the mugato for their horns, even though Mariner points out they could just replicate them. Boimler and Rutherford convince the Ferengi that making the planet into a preserve and then marketing the hell out of it would be a more profitable venture.

The Ferengi are hunting the mugato for their horns, even though Mariner points out they could just replicate them. Boimler and Rutherford convince the Ferengi that making the planet into a preserve and then marketing the hell out of it would be a more profitable venture.