Film / Tarzan and His Mate 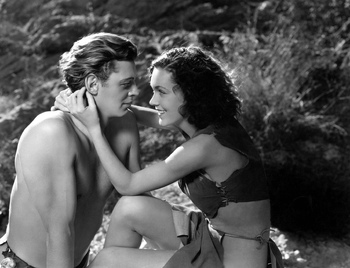 Tarzan and His Mate is a 1934 film directed by Cedric Gibbons, starring Johnny Weissmuller as Tarzan and Maureen O'Sullivan as Jane.

It's the second of twelve films in the Weissmüller Tarzan series, and a direct sequel to the first film, Tarzan the Ape Man. In this one, an old suitor of Jane's, Harry Holt, has come back to Africa. Harry has two goals. The first is to try to talk Jane into leaving Tarzan and her idealized jungle existence and coming back to London and civilization with him. The second is to find an elephants' graveyard of ivory and make a lot of money (which was both his and Jane's goal in the first film before encountering Tarzan). Coming along with him and mainly interested in the second goal only is Martin Arlington, a broke British aristocrat who has put the last of his money into the expedition.

Eventually Holt and Arlington are successful in contacting Tarzan and Jane. Holt quickly gives up on his hopes for Jane when she makes it clear that she is not interested in going home and wishes to remain with Tarzan. The second goal also runs into difficulties when Tarzan, once he is told just why Holt and Arlington want to go to the graveyard, refuses to lead them there. Arlington, unwilling to take no for an answer, mortally wounds an elephant so the safari can follow it to the graveyard. When Tarzan intervenes to stop them, Arlington takes even more drastic action.