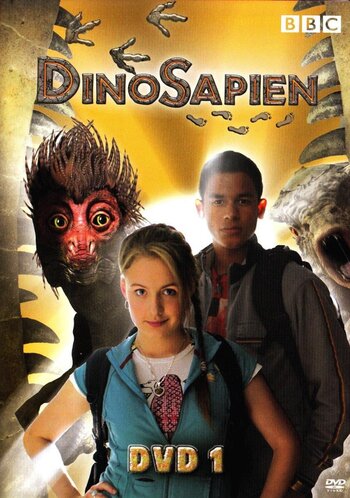 Best. Summer Camp. Ever
"People think dinosaurs are extinct. But what if they're wrong?"
— Lauren, in the show's opening.
Advertisement:

A British/Canadian children's Science Fiction adventure show, the series follows the events at a paleontology themed summer camp in Alberta, Canada. A freak earthquake in the badlands briefly opens up an entrance to a Lost World where dinosaurs survive to the present day. A young, raptor-like dinosaur called Eno flees to the surface while chased by two rivals called "Diggers". A second earthquake seals the entrance behind them and strands them at the surface. At the same time, a camp counselor named Lauren Slayton stumbles upon the Diggers and is saved by Eno. Across the season, she has to both protect Eno from prying eyes, keep the Diggers from reaching the camp; and see what ties might exist between the dinosaurs and her father's disappearance in the region years ago.

The first and only season premiered on CBBC and Discovery Kids on March 24th, 2007; and ran for fifteen more episodes till the finale airing on June of the same year. Though no second season was green lit, the show was rerun frequently over the years, the last showing being on The Hub on its fifth anniversary.