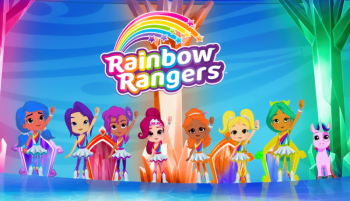 Help is a rainbow away!
Advertisement:

The series follows seven magical girls who live in Kaleidoscopia, a fantastic land at the other end of the rainbow that is home to magical creatures. Whenever Kalia, the Spirit of the Rainbow, senses trouble, the Rangers go on missions to Earth to help protect it and its natural beauty. Usually their rescues involve animals, but sometimes they have to contend with Preston Praxton, his daughter Patty, and later his sister Priscilla, who have no respect for the environment and often make life difficult for the plants and animals of Earth.

When troubles come, we're on the way! Rainbow Rangers save the day!
Feedback

The opening theme to Rainbow Rangers.

The opening theme to Rainbow Rangers.