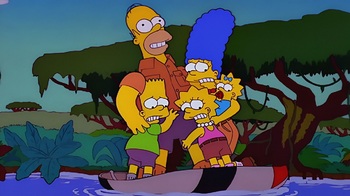 "Don't worry. Being eaten by a crocodile is just like going to sleep... in a giant blender."
After Homer's jerk ways at the supermarket cause a bag boy strike, the Simpsons are left without food — until they find a 1960s-era box of animal crackers advertising a contest where the winners get to go to Africa.

Tropes appearing in the episode: