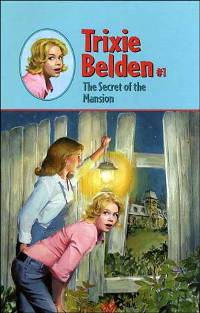 The Trixie Belden series is a series of girl detective novels, written between 1948 and 1986. The first six books, which introduced the main cast, were written by Julie Campbell Tatham, while the remaining 33 were ghost-written by a variety of authors under the pseudonym Kathryn Kenny.

The titular Trixie is a thirteen year old girl who lives in the fictional town of Sleepyside-on-Hudson, in New York State. She and her three brothers (sixteen year old Brian, fourteen year old Mart, and six year old Bobby) live on Crabapple Farm, which has been in their family for at least three generations. The first book sets up Trixie developing a friendship with Honey Wheeler, a lonely rich girl who has just moved into the Manor House next to their farm, and the two investigating the case of fifteen year old Jim Frayne, who has run away from his abusive stepfather, and who is adopted by Honey's parents at the end of the second book. The two girls were behind the forming of their club, the Bob-Whites of the Glen, or BWGs, which consisted of Trixie, Brian, Mart, Honey, Jim, local girl Diana Lynch, and New York City orphan and ex-street-gang member, Dan Mangan.

Six of the seven club members were paired off romantically, though romance was rarely explicit in the books; Honey had a long-standing crush on Brian, Mart and Diana developed feelings for each other, and Trixie and Jim had something of a romance, though this was downplayed in later books.