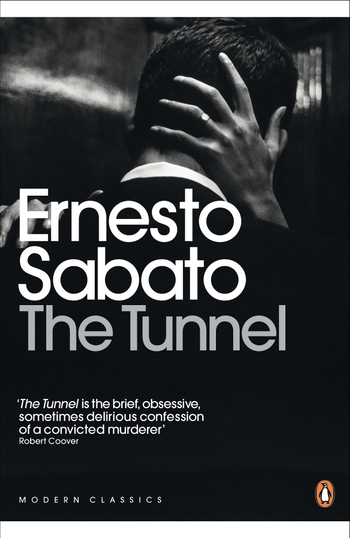 The Tunnel is a 1948 existentialist novella by the Argentinian scientist-turned-writer Ernesto Sábato, first of a trilogy consisting of The Tunnel, On Heroes and Tombs and Abbadon the Destructor.

Juan Pablo Castel was once a famous painter, but now he is in jail after murdering the only woman that ever understood him, Maria Iribarne. He will tell you the story, and tell it in the most fair way possible without any justifications of any kind as a sign of hatred for all the critics in the world and because of... well, he just feels like telling it.

Narrated by Castel's ultra insane and rarely to-the-point voice, this little book tells the story of a suffering soul desperately trying to quench his loneliness, only to fail and realize the reality of his perpetual doom.

Not apt for depressive people.

Tropes this work include:

Advertisement:
Did we mention yet that True Art Is Angsty?