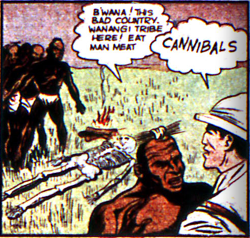 These are the Adventure Archaeologist's stock enemies... Well, they used to be.
M'Baku: One more word, and I will feed you to my children.
Agent Ross: [loud gulp]
M'Baku: I'm kidding, we are vegetarians.
— Black Panther
Advertisement:

Once upon a time, it was pretty much a given that any dark-skinned, non-Christian native tribes encountered by a European explorer hero would be consumers of human flesh. The stereotypical Cannibal Tribe are Always Chaotic Evil, dress in very little but for the Skeletons in the Coat Closet, and live in wooden huts around a large fire with an enormous cooking pot sitting on top of it (notably this pot will usually be iron, despite the tribe otherwise seeming to be stuck in the stone age).

The Missionary may be already there, trying to make them change their ways, or he might be in our hero's party... or those might be his bones adorning the chief's throne. Monstrous Cannibalism may be practiced within the tribe if they run out of captives, with simply foraging for vegetation or nonhuman animals apparently having never been considered as a source of sustenance.

Subtrope of Hollywood Natives. Supertrope of Captured by Cannibals and the related exploitation film genre, Cannibal Film. Contrast with Cannibal Clan, where the cannibals are just a family, typically from a culture where cannibalism is not acceptable. Subtrope of Humans Are Bastards. And ironically, the Cannibal Tribe's attitude towards foreigners makes them a subtrope of Politically Incorrect Villain.

"Eat of my People"

Lizard Priest serves food from his tribe... which is the flesh of his Great-Grandfather. Dwarf doesn't seem to mind.

"Eat of my People"

Lizard Priest serves food from his tribe... which is the flesh of his Great-Grandfather. Dwarf doesn't seem to mind.