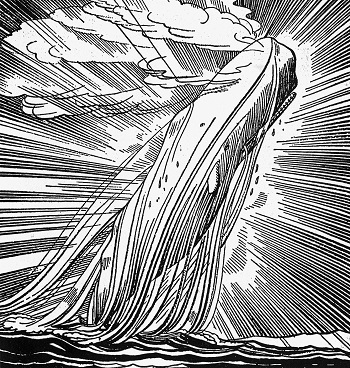 Widely considered as one of the greatest American novels, Moby-Dick; or, The Whale, written by Herman Melville in 1851, is either a story about the hunt of a dangerous whale by a madman that shows Melville's work, or an encyclopedia on whaling and cetology with a Framing Device. Or both.

The plot follows a man named Ishmael, that, infatuated with the sea (apparently, it's a periodical thing), decides to sign on for a whaling ship's voyage to try out how whaling feels. He and his newly-met best friend Queequeg choose the Pequod under the command of the monomaniacal Captain Ahab, and he eventually finds himself in the middle of Ahab's mad hunt for Moby Dick, the eponymous "White Whale" that ate his leg. Tragedy ensues.

Moby-Dick is full of symbolism, and much more has been added by scholars and commentators. Common meanings for the whale, for instance, are: nature, fate, the ocean's fury itself, Satan, and God (as an invincible opponent who is never actually overcome at any point in the novel).

This book is part of the Hollywoodian Small Reference Pools. Ignoring its real-life literary merits, it is a convenient shorthand for "huge boring Doorstopper assigned for reading by high-school teachers" in any given kids series. Whether this also implicitly states that execs think that Kids Are Morons is debatable. Referencing the book is often a shorthand signifier that a character is cultured (and possibly Wicked Cultured) in Hollywood and other American stories. While it's well-known elsewhere in the world, it doesn't have the same symbolic weight.

Moby-Dick has been adapted to screen several times, the most famous version being with Gregory Peck as Ahab. Patrick Stewart was inspired to play the role following an allegorical comparison to Ahab in one of his movies. A concept album based on Moby-Dick called Leviathan was also made by prog-metal band Mastodon. Also, German Doom Metal band Ahab not only take their name from the book, their first album,

called "The Call of the Wretched Sea", is also based on Moby-Dick. Also a common source of Homage or Whole Plot Reference stories, which are a trope of their own, Moby-Dick itself was partially inspired by a real life account of a whaling vessel, the Essex

, that was attacked and sunk by a sperm whale. The eponymous whale was also heavily inspired by a real whale known as Mocha Dick,

who lived off the western coast of Chile in the early 19th century, and was greatly feared by whalers of that era.

There is a characters page.

"Is it that by its indefiniteness it shadows forth the heartless voids and immensities of the universe, and thus stabs us from behind with the thought of annihilation, when beholding the white depths of the milky way? Or is it, that as in essence whiteness is not so much a color as the visible absence of color; and at the same time the concrete of all colors; is it for these reasons that there is such a dumb blankness, full of meaning, in a wide landscape of snows — a colorless, all-color of atheism from which we shrink?"