Literature / On the Road 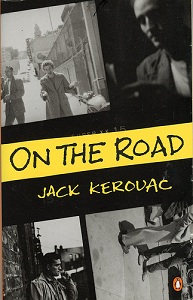 Road Trips! Drinking! Poverty!
"Slim sits down at the piano and hits two notes, two Cs, then two more, then one, then two, and suddenly the big burly bass-player wakes up from a reverie and realizes Slim is playing "C-Jam Blues" and he slugs in his big forefinger on the string and the bog booming beat begins..."
— Part of one of the many sentences in On the Road
Advertisement:

On the Road is a 1951 novel by Jack Kerouac. It is considered to be the masterwork of The Beat Generation, along with Naked Lunch and Howl (1955). The narrative takes place between 1947 and 1950. The book was not published until 1957.

It is semi-autobiographical and relates events from the time Kerouac spent traveling and occasionally hitchhiking from coast to coast. However, because of legal reasons, the main character is actually an Author Avatar named Sal Paradise who is a semi-impoverished writer and recent divorcé. It also details his friendship with the increasingly crazy Neal Cassady (whose name has been changed to Dean Moriarty) and other writers of the Beat Generation such as William S. Burroughs and Allen Ginsberg who also show up with different names.

The original manuscript was written in one long scroll with no paragraph breaks whatsoever. It was finally published as "The Original Scroll" in 2007, restoring many references to sex, people, drugs, crime, and the relationship between Neal Cassady and Allen Ginsberg, which were all censored when the book was first published.

On the Road has had a huge influence on modern culture with such personages as Bob Dylan, Jim Morrison and Hunter S. Thompson, among others, citing it as an inspiration. It is also considered one of the quintessential American Road Trip Plot novels, but then again, so is Lolita.

Peculiarly for the "quintessential American road novel", an abortive first draft of the novel was found among Kerouac's papers... written in his native Quebecois French

It was finally adapted into a movie in 2012 — the earliest attempt to adapt it was to have starred a young Marlon Brando. The film stars Garrett Hedlund, Sam Riley, Kristen Stewart, Alice Braga, Amy Adams, Tom Sturridge, Danny Morgan, Elisabeth Moss, Kirsten Dunst, and Viggo Mortensen.

Not to be confused with Cormac McCarthy's The Road.

On the Road contains examples of:

Alternative Title(s): On The Road