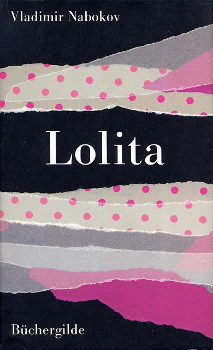 Lolita, light of my life, fire of my loins. My sin, my soul.
— Opening lines
Advertisement:

Lolita is a 1955 novel by Vladimir Nabokov about the relationship between erudite pedophile Humbert Humbert and his stepdaughter/kidnappee Dolores Haze. The action takes place between 1947 and 1952, and is chock-full of convoluted wordplay, multilingual puns, and allusions to everything from entomology to Edgar Allan Poe. Originally written in English and set in the US, it had to be published in France as pornography because no one else would touch it. Nabokov himself pointed out that this is probably the main reason why parents don't name their daughters "Lolita" any more.

This is where we get the terms "Lolita Complex", or "Lolicon" in Japan, and the slang for "Lolita", meaning a sexually attractive and/or promiscuous young girl.

Adapted into two films, one by Stanley Kubrick in 1962, starring James Mason as Humbert Humbert and Sue Lyon as Lolita, the other by Adrian Lyne in 1997, starring Jeremy Irons as H.H. and Dominique Swain as Lolita.