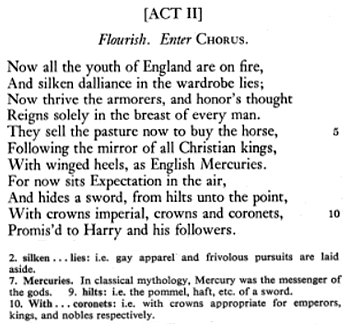 A version of a written text, more often than not a collection of previously released material, that contains notes from the author (or someone else with insight into the work) in footnotes or sidebars.

This is very common with textbook editions of texts using foreign languages or archaic forms of English, usually to explain idioms that would never make sense to us modern, English-speaking folk. For instance, pretty much anything Shakespeare wrote has a few annotated editions. The Canterbury Tales and Beowulf, being written in Middle and Old English respectively, are also commonly available in annotated editions.

Also common with certain classic works of Literature, especially those with a reputation for being "dense." Finnegans Wake and Ulysses by James Joyce can be nearly impenetrable without annotation.

It can also serve as a way to explain creative decisions if the creator is A) still alive and B) the one doing the annotations. This variant is very common in collections of comics.

Not to be confused with the annotated videos that are created by the Annotation Station / Annoverse.

Alternative Title(s): Once More With Endnotes