Literature / Time Out of Joint 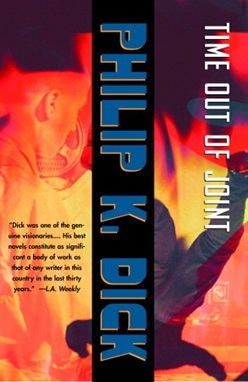 Ragle Gumm is a World War II veteran living with his sister, Margo, and her husband and son in an idyllic little town in The '50s. He makes his living as a newspaper puzzle champion, and spends his ample free time relaxing, enjoying his modest fame amongst the locals, and flirting with his neighbor's pretty wife.

Now if only he could stop hallucinating.

Ragle tries to buy a snack from a soft-drink stand, but the stand dissolves into thin air leaving behind a slip of paper that reads "SOFT-DRINK STAND." He rides on a bus, but sees the bus reduced to a mere framework and all the passengers disappear except for him and the driver. He digs around in some muddy ruins and finds a phone book full of disconnected numbers and a magazine featuring some movie star he's never heard of. When his brother-in-law has an unnerving episode of déjà vu in the bathroom, Ragle starts to wonder if the problem is not in his own head, but in the world around him.

Time Out of Joint is a typical trip from Philip K. Dick containing many of his trademarks: conspiracies, paranoia, science fiction, nuclear war, and a protagonist who can never be sure if what he's experiencing is real or not.