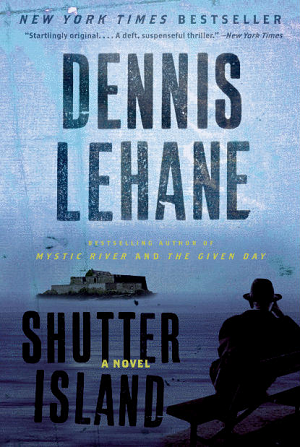 "We gotta get off this rock, Chuck."
Advertisement:

Shutter Island is a 2003 novel by Dennis Lehane.

In 1954, US Marshal Teddy Daniels and his new partner Chuck Aule are assigned to investigate the disappearance of multiple murderess Rachel Solando, who is a patient at Shutter Island's Ashecliffe Hospital, a mental hospital for the most violent of the criminally insane. It is revealed that Andrew Laeddis, the man responsible for Daniels's wife's death, is incarcerated there as well.

As the marshals investigate further, they begin to uncover hints that Ashecliffe Hospital may be home to a living nightmare of Nazi-esque experimentation on unwilling patients.

But of course, all is not as it seems...

Perhaps one of the most heavily symbolic novels/films in years, to the extent that it will screw with your mind HARD.