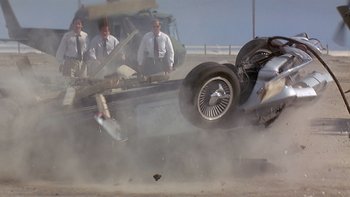 "I know a good body shop in Fresno if it's insured."
Tycho: I promised Darklighter I'd bring this baby back without a scratch!
Winter: [shoots off their own hood ornament] Now it's scratched. Get closer!
— Battleground: Tatooine
Advertisement:

So there's this total jerk (most likely the protagonist's hateful father, hateful older brother, hateful neighbor or hateful schoolmate), see, and he has a really nice car, most likely a valuable, shiny, red, convertible classic car, sports car, or classic sports car. And he worships the ground it drives on. And he makes one thing absolutely clear to the protagonist: that if they ever once dare to so much as touch it, set foot near it, or even look at it the wrong way, he will rip off their testicles and use them as rollers to paint over the fingermarks they left.

Inevitably, one of three things will happen:

If the one who owns the car is a main character, the trope is Watch the Paint Job. See also It's Going Down. Practically a subtrope of What Could Possibly Go Wrong?. Compare Chronically Crashed Car, Priceless Ming Vase, and Milholland Relationship Moment. Contrast The Alleged Car, a vehicle whose defining quality is being terrible/hated instead of pretty/loved. Destruction will be averted with an Invincible Classic Car.

To Nazz's annoyance, Kevin keeps prioritizing his bike's safety over hers.

To Nazz's annoyance, Kevin keeps prioritizing his bike's safety over hers.