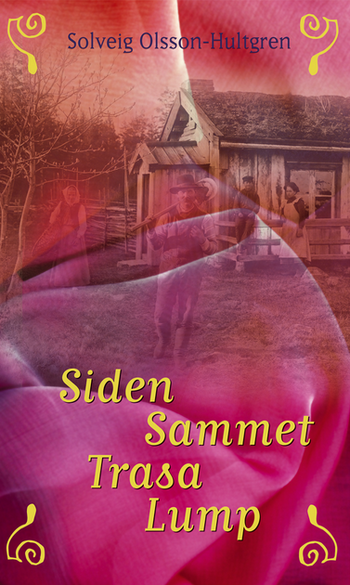 The Anderssons by Solveig Olsson-Hultgren (born in 1958) is a Swedish Young Adult Literature series, where we follow the girls within one family from 1899 and 1999. In the very beginning, the family is still very poor and has to work hard to keep their homestead. But it turns out that the 20th century is a time full of changes, and it becomes possible for the Andersson girls to follow their dreams and find their own kind of happiness. The whole series is made up by ten different installments, where we can follow nine different protagonists.
Advertisement:

1: "Siden, sammet, trasa, lump" ("Silk, velvet, tatters, rags"), first published in 2002, takes place during the summer of 1899. It follows the story of eleven-year-old Elin Andersson, who has to run away over the summer, so she can earn money and help her parents keep their new homestead...

2: "Arbetets döttrar" ("Daughters of the labor"), first published in 2003, takes place in 1903 and 1904. Elin is now fifteen years old and works hard at a paper mill. But she also has to deal with being torn between two different suitors, becoming the only female member of the local worker's union and dreaming about becoming an artist...

3: "Drömmar av glas" ("Dreams of glass"), first published in 2004, takes places in 1917. Rebecka Andersson is Elin's eleven-year-old daughter, who has to leave the city life of Stockholm to live with her grandparents in the countryside. It is hard for her to adjust, and she also becomes bullied in her new school. But she also learns to deal with the new situation and dream of a different future...

4: "Nya tider" ("New times"), first published in 2005, takes place in 1920 and 1921. Rebecka is now fifteen years old and has moved into the town of Växjö, where she now shares an apartment with her aunt Ida Sofia, to work in a shoe store until she can start at the teacher's seminar. But things don't turn as easy as she thought they would, and it turns out that her mother and her aunts have their share of problems too...

5: "Det fjärde rummet" ("The fourth room"), first published in 2006, takes place in 1932. Anna Andersson is fourteen years old and dreams about becoming an architect. But instead, she has to haunt jobs to support herself, her sick mother and her little sister. It is only through the help from her aunts and her cousin Rebecka, that she can start hoping for a better future...

6: "Skärvor av kristall" ("Shards of crystal"), first published in 2007, takes place in 1938 and 1939. Louise Stjärnstedt is fifteen years old when her mother (Mandi) dies. And that is the start of a huge journey for her. She now starts to realize that her father has been abusive towards her mother, at the same time as she develops feelings for a Jewish boy...

7: "Roller och ridåer" ("Roles and curtains"), first published in 2008, takes place in 1948. Judith Ek is sixteen years old and has run away from her foster parents to find her biological mother: Elin Andersson. Elin is very surprised to see Judith, but agrees to take care of her over the summer. And that is beginning of a big journey for them both...

8: "Spränga gränser" ("Bursting boarders"), first published in 2009, takes place in 1956. Cecilia Berglund is Rebecka's fifteen-year-old daughter, who does her best to become the first girl in the family to get a High School diploma. But she also starts a rock'n'roll band for girls and helps her dyslexic brother to get his poems published...

9: "Revolternas år" ("The year of revolts"), first published in 2011, takes place in 1968. Åsa and Saga live a rather uneventful life on their father's farm, until the day when their mother is hit by a car and has to stay the hospital. Åsa dreams of becoming a designer and hates doing all her new chores at the farm. Saga has set her mind on finding the man, who injured her mother.

10: "Fyra systrar" ("Four Sisters"), first published in 2012, takes place in 1975. Nina is Louise's sixteen-year-old daughter, who has been sent away to her cousin Judith to get away from the bad influences in the city of Malmö. The last few chapters take place in 1999, where we can see how the women and girls in the family prepare themselves for a new millennium...