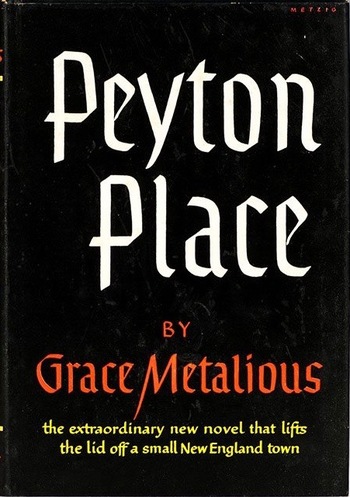 The original Town with a Dark Secret.

It is difficult to overstate the sensation that Peyton Place, the 1956 debut novel by New Hampshire housewife Grace Metalious, caused when it was first published, or the degree to which it scandalized America, small towns, the people that lived in them, and more or less the whole genre of paperback fiction, which at the time was mostly populated with happy stories about happy people, good times, and noodle salad. That's The '50s for you.

But Peyton Place changed all this. Later described as "The Novel That Shocked the Nation" — which it did, true enough — it concerns itself mainly with the various skeletons that outwardly-respectable people have in their closets and how they try to keep them there. Still, it was hugely successful in its day, spawning a sequel, a feature film and later a television series.

In terms of plot, the novel covers the overlapping lives of just about everyone in the sleepy New England town of Peyton Place over a number of years in the late 1930s and early '40s. There's Allison MacKenzie, kinda-sorta the main character, who waltzes through life mostly dreamily, disdaining Peyton Place and its people and all the while dreaming of a better life elsewhere, anywhere; Allison's mom Constance, who went off to New York City in her youth and got knocked up by a Big City Businessman and carried the shame with her the rest of her life; new high school principal Tomas Mak—er, Rossi, in whom Connie sees all the flaws and beauty of the father of her child; Seth Buswell and Matt Swain, local notables (publisher of the newspaper and the chief doctor at the hospital, respectively) who have their fingers firmly pressed on the pulse of the town; wealthy Leslie Harrington, whose textile mill is the town's main employer, and his son Rodney—and Rodney's girlfriend Betty; and then there's Selena Cross and her little brother Joey, and their stepdad, Lucas...

The novel was adapted into a 1957 film starring Lana Turner, and subsequently a Prime Time Soap running on ABC television from 1964-69 and starring Dorothy Malone and Mia Farrow. Metalious also followed up with the 1959 novel Return to Peyton Place, which was a critical and commercial flop; this sequel was itself adapted as an In Name Only film in 1961.