Too Awesome to Use 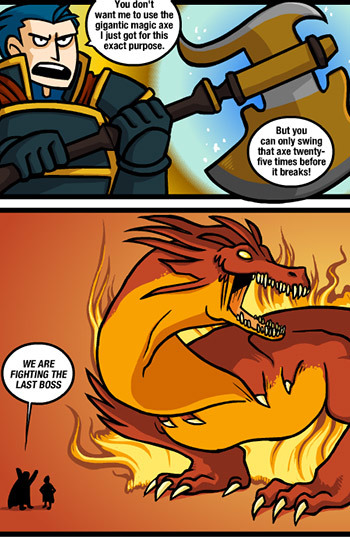 "But what if another one shows up?!?"
"We are certainly in great need," answered Caspian. "But it is hard to be sure we are at our greatest. Supposing there came an even worse need and we had already used it?"
"By that argument," said Nikabrik, "your Majesty will never use it until it is too late."
— C. S. Lewis, The Chronicles of Narnia: Prince Caspian
Advertisement:

It's flashy. It's awesome. It's unstoppable.

But it's also single-use and impossibly scarce.

Yup, it's going to sit safe and sound in your inventory until the very end of the game.

Games such as RPGs featuring an inventory system are prone to giving you items that are scarce but very powerful. It could be an item that buffs all your stats and makes you invulnerable for an extended period of time. It could be a special power that lets you fly, or a Status Buff that lets you destroy an enemy with the snap of your fingers. It could be a Superweapon with an extremely limited amount of ammo, or an ultimate sword that breaks after a certain number of uses.

The item is useful, awesome, and practical — unfortunately, you're never going to use the item outside of maybe the last boss (as you wouldn't need it afterwards). This is either because you're afraid to waste such a valuable treasure and will be waiting for that one good opportunity to use it... and that opportunity never comes. Or maybe because it simply pains you to imagine having it missing from your inventory. This goes double if you never know what and how many unexpected and arbitrary-difficulty challenges the game might throw at you any next moment (and JRPGs love doing that), so you feel compelled to always hold to a failsafe or multiple just in case. note  Which is critical if the game features sections without an ability to backtrack — even if death is not final, if you're unable to beat the next challenge, you've effectively lost the game permanently, and all the time spent on it is wasted.

Another factor that contributes has to do with game balance. If you make a super-powerful super-rare healing potion, it'll be most useful in a similarly difficult battle. But what if the player used the potion already? Do you make that fight easy enough that it's winnable without the potion (thus the optimal option is to fight without it because you didn't actually need it), or make it so difficult it's heavily recommended to use the potion (thus a player that did waste the potion hits a brick wall)? Of course, you may save it until the last boss, only to realize you can't use it during boss fights.

If a Too Awesome to Use item sticks around long enough, it can sometimes become Awesome, but Impractical as it gets outclassed by a much more efficient or re-usable item; in a game with Character Levels, it may also just become useless as your characters' stats outstrip the item's power. In any case, the item may just become useful in the Bonus Dungeon if one exists in the game.

Conversely, if there's an item duplication glitch in the game or some game mechanic that lets you obtain a spare or two, then of course you're going to be using it all the time.

Board Games
Card Games
Choose Your Own Adventure
Tabletop Games

The warships too expensive to use in an actual war.

Alternative Title(s): But What If I Need It Later

The warships too expensive to use in an actual war.