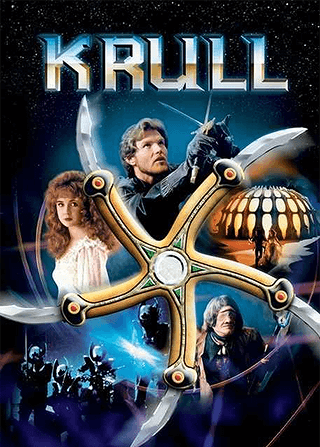 "The ancient prophecy: that a girl of ancient name shall become queen, that she shall choose a king, and that together they shall rule our world, and that their son shall rule the galaxy."
Advertisement:

An Evil Overlord from space, called the Beast, invades the world of Krull due to a prophecy that a marriage that unites that world will have a son who will rule the galaxy. When two great kingdoms are going to be joined by a marriage (necessitated by this invasion), the Beast's army, the Slayers, kidnap Princess Lyssa just before her wedding is completed, and Prince Colwyn goes on a quest to save her, aided by a wise old man, a gang of escaped prisoners and thieves, and an ancient sentient weapon.

Supposedly it was originally meant to be the official Dungeons & Dragons movie (under the title The Dragons of Krull), but the license was somehow lost before the film was released. But this may simply be an Urban Legend, given that it has been officially denied

by Gary Gygax himself.

See also Hawk the Slayer, another fantasy film made in Britain.

Has nothing to do with the protagonist of Thomas Mann's 1954 novel Confessions of Felix Krull. Or the island state of Krull from Discworld. Or Kull.