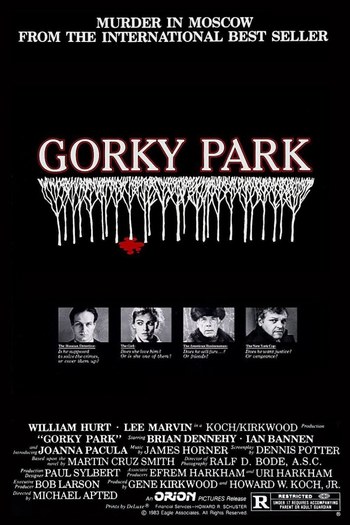 Gorky Park is a mystery novel published in 1981 and written by Martin Cruz Smith. A Film of the Book, directed by Michael Apted and starring William Hurt, Lee Marvin, Brian Dennehy, Joanna Pacuła, Richard Griffiths, and Ian McDiarmid, was released in 1983.

Arkady Renko, a Chief Investigator with the Militsiya, finds himself investigating a gruesome crime scene in one of Moscow's most popular parks: Two men and a woman, shot dead, with their fingertips cut off and their faces disfigured to prevent identification. It isn't long before a team from the KGB become involved, led by Major Pribluda, a long-time thorn in Renko's side. The mystery only gets deeper from there with the added involvement of an American sable importer, a Russian political dissident, an NYPD Detective, and more than a few of Renko's superiors in Moscow.

Arkady would go on to be the protagonist of several more novels, even as the Soviet Union collapsed and The New Russia came into being.