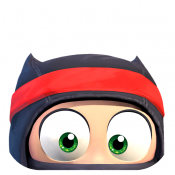 Clumsy Ninja is a Mobile Phone Game developed by NaturalMotion for iOS and Android devices. It was first released on November 21, 2013, and has seen subsequent updates since that date.

In the game, you take control of a ninja named Clumsy Ninja, who's rather clumsy and is in search of his training partner Kira. To aid in his search, you must train Clumsy and interact with him in various ways so he can overcome his clumsiness and travel across the land. He is also accompanied by Sensei, who gives quests for training the Ninja, and a chicken and squirrel, both of which produce coins, give quests, and can be interacted with, too. Later updates added a second playable character, Lily (Kira’s sister), and a “Ninja Book” that puts the plot of the game in greater detail.