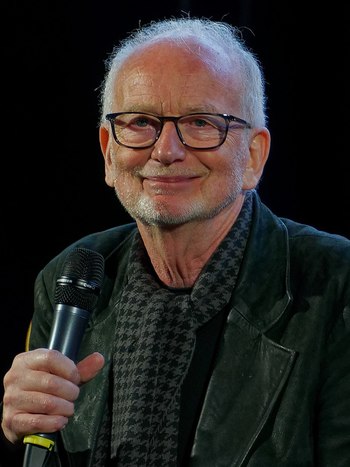 "Everything is proceeding as I have foreseen."
"Consistency is very important when you're making films."
Advertisement:

Did you ever hear the Tragedy of Darth Plagueis the Wise?

Ian McDiarmid (born 11 August 1944 in Carnoustie, Scotland) is a Scottish character actor and director. He is well known for his film and television appearances, but is perhaps most famous for his chilling performance as Emperor Palpatine in the Star Wars films.

He earned a Master's degree in Clinical Psychology at the University of St. Andrews, but eventually found that his calling was in theatre. He went to the Royal Academy in Glasgow, where he received the prestigious gold medal for his work. He now has a highly successful career as a theatre director, and from 1990 until his retirement in 2001, was Joint Artistic Director of London's Almeida Theatre in Islington. He and his co-director Jonathan Kent (no, not that one) revived the Almeida and persuaded many Hollywood stars (including Kevin Spacey, Ralph Fiennes and Anna Friel) to tread the boards in their humble theatre. They won the coveted London Evening Standard Award in 1998 for their efforts.

As mentioned above, he is renowned for his work in British theatre, having won plaudits as an actor and director from a wide variety of sources. He has starred in a variety of Shakespeare plays, including Hamlet, The Tempest, Much Ado About Nothing, Ross and the Porter in Trevor Nunn's 1976 TV adaptation of Macbeth, The Merchant of Venice and King Lear. Other theater roles include the title role in Timon of Athens, Ivanov in Tom Stoppard's Every Good Boy Deserves Favour and Harry Hackamore in Sam Shepard's play Seduced. He has also acted in several television programmes such as City of Vice (which also got a browser game tie-in called Bow Street Runner).

Tropes relating to the man and his work: