Literature / The Glass Books of the Dream Eaters 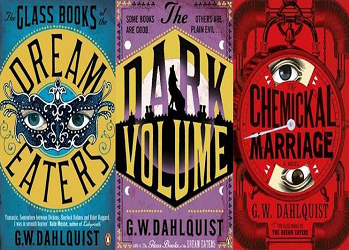 The Glass Books of the Dream Eaters is a 2006 novel by Gordon Dahlquist. It was followed by the sequel The Dark Volume (2008), and concluded by The Chemickal Marriage (2012).
Advertisement:

Imagine you had the means to bend and form another person's will as easily as plasticine, or the knowledge of how to conserve your memories in a way to relive them again and again, as intensive as the first time. Better yet, what if you could relive the most debauched memories of others as if they were your own? What could you do with such a valuable ability - Take Over the World? Well, why not - especially if you're a party of bored, rich nobility and bourgeoisie with nothing better to do.

Into this stumbles our ensemble, consisting of two gentlemen (to use the term quite loosely, scandalously even), and one young lady. Our trio start off with separate reasons and in fact do not cross paths for a considerable amount of time. The unlikely adventurers in question are as follows:

After finally meeting up under most curious circumstances, they band together in order to get their answers, and find themselves discovering much more than they ever wanted to know - or were ever meant to.