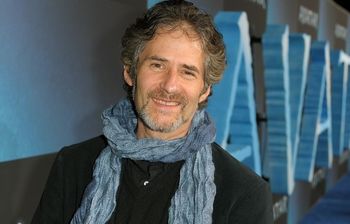 James Roy Horner (August 14, 1953 – June 22, 2015) was a professional purveyor of both Orchestral Bombing and Award Bait Songs. Born in Los Angeles, California, he was the son of the late set designer Harry Horner and the elder brother of filmmaker Christopher Horner. He wrote the score for numerous films, working alongside James Cameron for three of his most successful films. He composed the scores for many family and Animated Films before his commercial success scoring Titanic (1997).

Most of his work is known for his incorporation of the Ethereal Choir and Celtic instruments, string orchestras, rhythmic percussion, very multi-layered pieces, as well as synth sounds. However, listeners tired of his "cute" sound, heard most prominently on his scores for Titanic (1997), Legends of the Fall or Avatar, can find much more epic (and seminal) material in his music for Star Trek II: The Wrath of Khan (his breakthrough within the industry), Krull, The Rocketeer and Willow, and dark, edgy and thrilling themes for the likes of Patriot Games, Gorky Park and Commando.

Known somewhat less fondly for reusing his music from previous films. Also along these lines, he had a habit of directly quoting themes and motives from 20th century Russian masters.

Horner, a private pilot in his spare time, was killed on June 22, 2015, when his airplane crashed near Santa Barbara, California. He was 61 years old.

Some of his scores include (reverse chronological order)

Works for television include: