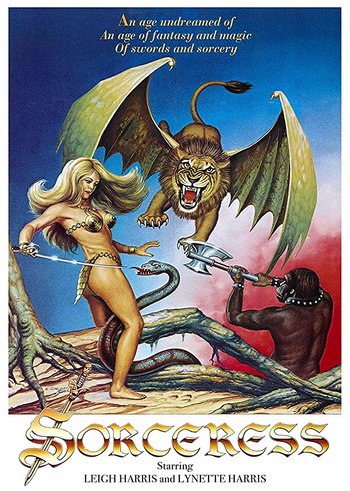 Sorceress has the dubious honor of being the first of many Heroic Fantasy films produced by Roger Corman in The '80s to capitalize on the popularity of fantasy films in the wake of Conan the Barbarian.

Filmed in Mexico by Coffy and Switchblade Sisters writer/director Jack Hill, he claimed to have taken inspiration for the basic story from The Corsican Brothers and wrote the script with future Chopping Mall and Deathstalker II: Duel of the Titans writer/director Jim Wynorski.

Sorceress is historically notable as Wynorski's first professional screen writing credit and Hill's last film. Reportedly Hill and Corman argued over the budget for the film, with Hill claiming Corman failed to deliver the money promised for filming. Coupled with the shooting made more difficult by flooding and a fire, Hill refused to work with Corman again, demanded his name be taken off the picture and retired from film-making afterward.

The plot centers on Evil Sorcerer Traigon, who in order to maintain his powers has to offer up his first-born child to his demonic master. His wife has other ideas, however, and escapes after giving birth to twin girls, a complication that momentarily stalls Traigon since he can't tell which child is the oldest and he can't just sacrifice them both, for some reason. The twins, Mara and Mira, are entrusted to the loyal warrior Krona, who promises to keep the girls safe, raise them as his own children and teach them the art of war.

20 years later, we discover that Krona elected to raise the girls as boys and that they have grown up into Playboy Playmates Leigh and Lynette Harris. Despite growing up on a farm, they've never learned the difference between boys and girls and, more disturbingly, nobody doubts their word that they are two burly farm boys until they take their shirts off! Left all alone in the world after Traigon killed their adopted family, The Twins fall in with a Barbarian Hero named Elrick (not THAT one!), a Viking named Valadar and a satyr named Pando who help them to avenge their families, not knowing that they are plotting to kill their birth father!