Film / Wizards of the Lost Kingdom 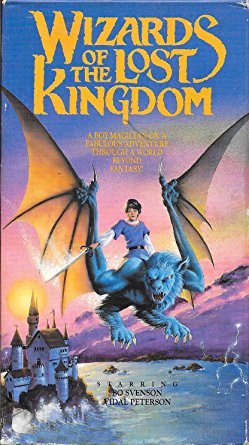 One of the many Heroic Fantasy films produced by Roger Corman to capitalize on the popularity of fantasy films at the time, Wizards Of The Lost Kingdom is to The NeverEnding Story what Deathstalker was to Conan the Barbarian.

Filmed in Argentina like most of Corman's other fantasy films from The '80s, Wizards Of The Lost Kingdom was apparently created in an effort to craft a more family-friendly film. Ironically, a goodly portion of the movie - including its opening credits - feature heavily edited Stock Footage from the decidedly adult Deathstalker and Sorceress.

After the pretentious Opening Narration tells us about a time of wizards making war with each other and The Good King Tylor putting a stop to this, The King is unceremoniously killed by the Evil Sorcerer Shurka and King Tylor's treacherous second-wife. The two plot to rule the kingdom together, but Shurka eventually turns on the queen, deciding to marry King Tylor's daughter from his first marriage.

The only hope for the kingdom is Simon - a whiney tween apprentice wizard who manages to lose the magical Ring of Power that his father, King Tylor's court wizard Wulfrick, entrusted him to guard and use against Shurka. The rest of the movie concerns Simon, his furry companion Gulfax and Kor The Conqueror - a drunken swordsman who keeps saving Simon from his own stupidity (much to the increasing annoyance of both Shurka and the audience) - trying to get back to the castle so they can recover the ring before Shurka can find it and become all-powerful.

It was followed by a "sequel", Wizards of the Lost Kingdom 2.

In 2017 it was included in the revival of Mystery Science Theater 3000. For tropes pertaining to that episode, see here.