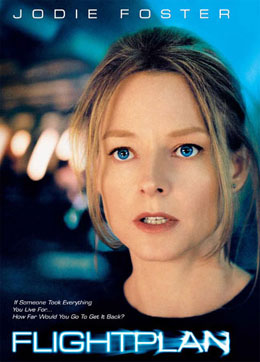 Flightplan is a 2005 thriller film directed by Robert Schwentke and starring Jodie Foster.

Foster plays Kyle Pratt, an airplane propulsion engineer whose husband has mysteriously died from falling off the top of a building. She and her six year old daughter, Julia (Marlene Lawston), are now heading back to Long Island from Berlin aboard the massive new passenger plane she helped design, the Elgin 474. The body of her husband is in the hold.

Three hours into the flight the two take a nap; when Kyle wakes up, Julia has disappeared without a trace. Everyone on board the plane, including air marshal Gene Carson (Peter Sarsgaard), flight attendant Stephanie (Kate Beahan) and Captain Marcus Rich (Sean Bean) insist that they never saw her daughter. Moreover, Julia's name is not on the flight manifest and there is no evidence that she was ever on the plane. That's when things get crazy.

Critical reception was mixed to negative. While the performances of the principal cast are praised; the plot is criticized as being riddled with holes and Fridge Logic.

Not to be confused with Japanese video game developer Flight-Plan, or Non-Stop, another thriller on a plane.