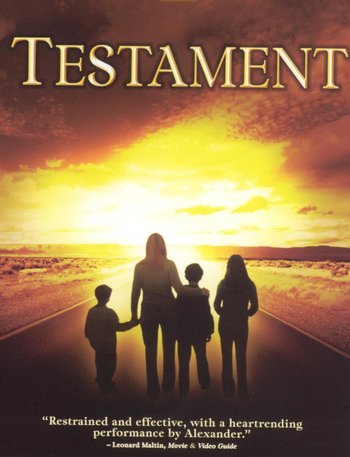 Testament is a 1983 drama film, directed by Lynne Littman and starring Jane Alexander and William Devane, about the effects of a nuclear exchange on a small California community.

Unlike The Day After and Threads, which deal with the catastrophic effect of direct strikes, the town of Hamlin suffers no physical damage from the bombs. Instead the residents are forced to deal with the (literal) fallout, as well as gradual radiation poisoning and the drawn-out collapse of what's left of the world outside.

Originally produced for PBS' American Playhouse before getting picked up for theatrical release. Jane Alexander earned a Best Actress Academy Award nomination for her performance.