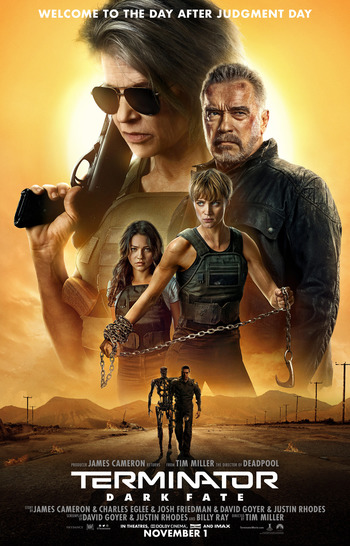 "Do you believe in fate, Sarah? Or do you believe that people can change the future every second by every choice that they make?"
"There once was a future in which humankind was hunted by a machine that could think and Terminators built to kill. A future without hope. That future never happened, because I stopped it to protect my son and to save us all."
— Sarah Connor
Advertisement:

Terminator: Dark Fate is the sixth film in the Terminator franchise, directed by Tim Miller (of Deadpool fame), written by Billy Ray, David S. Goyer, Justin Rhodes and Josh Friedman, and based on a story by James Cameron, Tim Miller and David Ellison. It marks James Cameron's return to the franchise in some creative capacity after a long absence, his first contribution to it since the Universal Studios attraction Terminator 2 3-D: Battle Across Time way back in 1996.

27 years after Terminator 2: Judgment Day, the Rev-9, an advanced hybrid Terminator (Gabriel Luna), is sent from the future in order to terminate a young Mexican woman named Dani Ramos (Natalia Reyes). A human cyborg from the same future named Grace (Mackenzie Davis) and Sarah Connor (Linda Hamilton) come to her aid, as well as an old T-800 Terminator (Arnold Schwarzenegger), for yet another fight for humanity's future.

The film is a direct sequel to Terminator 2: Judgment Day (whose US TV rights are currently held by the North American distributor of Dark Fate, Paramount, a result of the studio acquiring Spelling Entertainment Group, including Worldvision Enterprises, in 1999), ignoring Rise of the Machines, Salvation, Genisys and The Sarah Connor Chronicles, in an Un-Reboot that dismisses all of these works as alternate timelines. It was released in Europe on October 23, 2019, and was then released in the USA on November 1, 2019.

"Everybody dies, if you don't make it!"