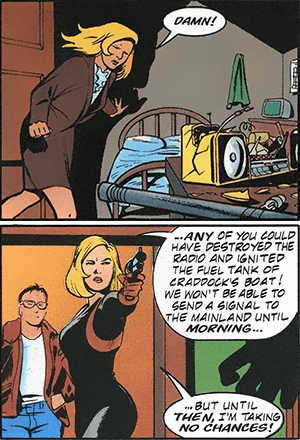 Tarrant: The communicator's dead. It's stone dead.
Soolin: I wish you could have found a less vivid way of putting that.
— Blake's 7, "Assassin"
Advertisement:

Yes, even before the black dude.

A two-way radio is put out of commission to allow the plot to proceed.

Back before cell phones had to be neutered for certain setups, the device that could really put a crimp in a plot's need to keep the characters isolated and cut off from information was the two-way radio. So in a lot of Twentieth Century media, the radio was put out of commission as quickly as possible. There were three main ways of doing this.

Many stories in the appropriate time period will have a radioman, usually called "Sparks", who will be stuck trying to repair the radio or get through the interference for most of the story. His isolation often causes him to score badly on the Sorting Algorithm of Mortality.

A form of Plot-Driven Breakdown. Compare Cut Phone Lines, which serve a similar narrative purpose, but are always sabotage. See Lost in Transmission, where a working connection line is suddenly cut off. Related to Impeded Communication, because the best way to have a plot get complex for the protagonists is to take out the communication. Basically, because of this trope, the radioman, cell phones and communication devices could technically count as a form of Story-Breaker Power, under the right circumstances.