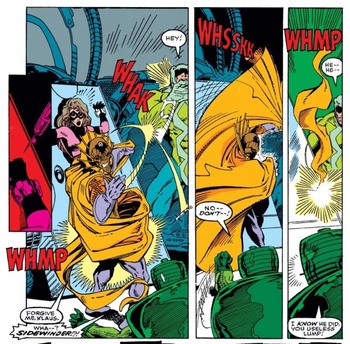 This is a trope where someone rescues somebody else, usually from a long way away, by teleporting. They don't just teleport to where they're being held and bust them out; they go right to where the person is, grab them, and then teleport out with them. It can also be done other ways, such as the rescuee being teleported from far away, or a rescuer arriving on foot to give the rescuee a Warp Whistle to allow him/her to escape. The exact execution isn't important (it could be technological, magical, or somewhere in the middle; the crucial element is that the teleportation is the direct means of the rescuing.)

This may require removal of Teleport Interdiction. If done poorly, can result in a Tele-Frag. It may use instantaneous teleportation or a portal. It can be initiated by a Warp Zone or Warp Whistle. May involve the use of Flash Step or an Extradimensional Emergency Exit.

A sister trope of Weaponized Teleportation, and can be a Sub-Trope of Teleport Spam. Often the rescuer is a Reality Warper.