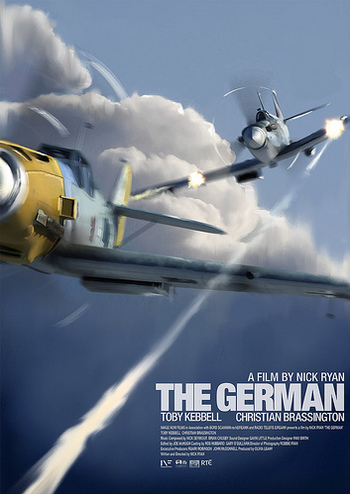 "A British fighter pilot pursues the German ace that shot down his friend across sky and country... with murder in mind. But he discovers it's not so easy to kill a man when you have to look them in the eye."
Advertisement:

The German is a 2008 Irish short war film written and directed by Nick Ryan, starring Toby Kebbell and Christian Brassington.

It follows a Royal Air Force fighter pilot during a tense air to air duel with a German foe during the Battle of Britain. Locked in a fight to the death, neither pilot knows how the war will end for them...

The German includes examples of the following tropes: