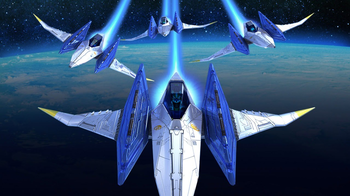 Ice Man: You can be my wingman any time.
Maverick: Bullshit. You can be mine.
— Top Gun
Advertisement:

It takes two to tango in the air combat business, so you need a wingman. Or three. Or sometimes more.

The wingman is a pilot of another plane whose job is to cover his or her lead's six o'clock—behind him—in an attack, and provide witty banter or, occasionally, someone to rescue. The wingman (or woman) will often have a contrasting personality to the Ace Pilot. They may also be wearing a red flightsuit.

In multi-player video games involving fighters, you can get a wingman as a given. Other games feature AI wingmen. They may utter the phrase "I Got You Covered!" Generally has nothing to do with Winged Men.

Compare Guy in Back, when a pilot has a companion sharing the same plane - for example, a navigator or radio operator. Since the F-4 Phantom II and F-14 Tomcat, two of the coolest planes around, are two-seaters, it's common to get a "four in two" group of characters.

Has mutated and been adopted as slang for the guy who, when you encounter a couple girls hanging out together, keeps one occupied so you can try to pick up the other. But that's not this trope. (It's this one instead.) And not to be confused with the '80s manga and anime called Yume Senshi (Dream Warrior) Wingman.

Many wingmen themselves may be aces, especially if they fly in a target-rich environment. When a group of aces are arranged into flights and wingmen, it is called a fat cat flight.