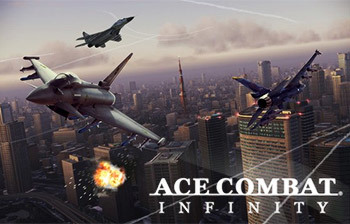 The sky is yours. Aces come to realize you as the Ace.
The day our sky fell, the heavens split to create new skies.
— Promotional trailers
Advertisement:

Ace Combat Infinity is the 16th game in the Ace Combat series, once again set on Earth instead of Strangereal, and featuring several superweapons, story elements and fictional aircraft from older games such as the CFA-44 and Heavy Command Cruiser from Ace Combat 6: Fires of Liberation, the ASF-X Shinden II from Ace Combat: Assault Horizon and the Stonehenge Turret Network from Ace Combat 04: Shattered Skies.

Infinity was, in essence, a Retool of Ace Combat 04 — set in a version of Earth that was devastated by the same Ulysses asteroid as Strangereal had been — but including elements from every game in the series. It is the second remake in the series (after Ace Combat: Assault Horizon Legacy retooled Ace Combat 2).

Infinity was free to play, and was only available on the PlayStation 3. The Japanese beta went live in December 2013. An International Beta was available from February 4th to 11th 2014.

The game was released on May 20th in Japan, with a North American release of May 27th and Europe on May 28th. After nearly four years of activity, the servers finally shut down on March 31st, 2018.

Even then, the skies kept on engaging the other.