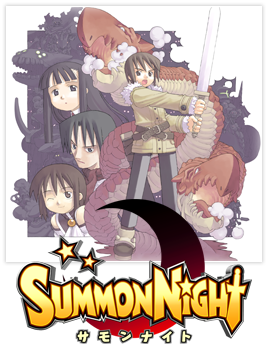 Summon Night is a series of Strategy RPG games developed by Flight-Plan and distributed by Banpresto and Atlus. It is their second such series after Black/Matrix and is notably much Lighter and Softer along with being better known. The series also contains three out of the fournote (Eternal Poison being the last one) Flight-Plan games to get a North American release, although all three are action-RPG spin-offs rather than from the main series.

The franchise centers around a multi-faceted world where people called summoners can get a Guardian Entity from one of the many parallel worlds that reside near them, which grants these people special skills and abilities. The games apply some Dating Sim elements to them as well, with every in-game night being a talk with one of your chosen party members. Building enough affinity allows for an epilogue with that character, with multiple endings for virtually all the characters that join you whether you play as a boy or a girl.

The series celebrated its 10th anniversary on January 6th, 2010 and has a commemoration website

. Unfortunately, the series is now effectively dead with the closing of its developer in August of 2010

... until a new game finally got announced in July of 2012 for the PSP

, alongside ports of all the previous main series titles.

The Summon Night series consists of: